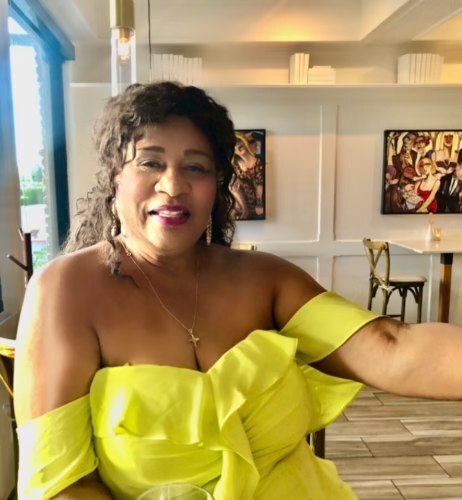 Hope Diamond calls herself a late bloomer. After all, she has been singing professionally for over 30 years. But once one hears her powerful and soulful voice on her recent Awaken CD, it is obvious that she is both youthful and quite timeless. Her ease in shifting between jazz standards and r&b classics is almost as impressive as the vocal talents that she displays as a natural part of her very individual style.

Hope grew up in Los Angeles, and Shreveport LA then moved to then a little town Ontario, California when she was in junior high. She remembers, “I was primarily raised on gospel music. I sang in church regularly from the age of four and was a lead singer in the choir from a young age. I did hear a lot of pop, country and Latin music in my eclectic neighborhood but, when I was 14, RnB took over. I was heavily into Motown and could sing every song there is.” While in junior high and high school, she sang RnB in a group with other young females. Hope discovered jazz while attending College where she took a course about the roots of jazz. Her music education continued at California Polytechnic State University at Pomona, but then she took a different career path. “I have always had the desire to help others so I majored in social justice and worked for 20 years in the criminal justice system. I worked very hard and wanted to make a difference and put away the thought of performing music for some time.”

As she entered her forties, Hope got the urge to sing again. “I started going out to jazz jams and sitting in. I knew around 10-20 jazz songs at the time so I had to learn a lot fast since I was sitting in with some great musicians.” However she soon realized that it was important for her to have her own group where she could really be featured. “I formed a trio in the 1990s, learned a great deal about jazz performance, bought my own sound equipment, and started playing clubs.”

Since that time, Hope has had many memorable performances. She worked on an Italian cruise line in Europe and the Caribbean for four months with a Ukrainian pianist, his trio and a Romanian horn player. “At the time, they knew the Great American Songbook much better than I did so it was a period of real growth for me.” She opened the Panama Jazz Festival, performing with the Shea Welsh band and Latin vocalist . “I was asked to teach children English through jazz at a private school in Beijing, China and that was a rewarding experience during the three months.” Hope worked regularly in Orange County with such pianists as Llew Mathews ( pianist for Nancy Wilson) and other great studio cats who taught her to swing! She was also always available to perform for charities and fund-raising events including for the Cancer Society and Project Angel Food.

Five years ago, after moving to Palm Desert, Hope started being featured regularly with arranger Paul McDonald’s big band, an important association that continues to this day. “We perform everything from Sinatra and Ella music to Motown, Nancy Wilson, Roberta Flack, and more contemporary songs.”
She was the host, designer and partner of Frankie’s Backroom Supper Club in Cathedral City, featuring top artists before sell-out audiences for a year before the club permanently closed during the Pandemic. She grabbed the 2019 winner of Desert’s Got Talent, and Hope had recorded her popular Christmas CD “Presence” when she lived in Atlanta which truly started her producing and performance excellence.

With the Pandemic underway, Hope Diamond used the downtime to record her new album “Awaken”, a set of nine songs that she loves from the RnB and jazz worlds. With invaluable contributions by producer Mike Parlett and arranger Paul McDonald, Awaken is a perfect showcase for Hope’s singing talents. The release made it to #23 on the Jazzweek charts in The early part of 2022, a particularly impressive rank for an independent CD.

Joined by several horns, occasional background singers, top players in her rhythm sections (including McDonald on keyboards), and with a guest appearance by trumpeter Tom Browne on “Old Devil Moon,” Hope is heard in very good company. This memorable outing includes her powerful rendition of Marvin Gaye’s “Trouble Man” (during which she handles the rapid lyrics effortlessly), a relaxed and confident version of “Speak Low,” her fresh remaking of the Randy Crawford hit “Rio de Janeiro Blue,” a soulful revival of “Never Can Say Goodbye,” and Hope’s assertive vocal on “Old Devil Moon.” She brings a jazz sensibility to “Just My Imagination” and “Until You Come Back To Me,” then she features her warm ballad singing on the 1980s Seawind hit “Follow Your Road,” and concludes with an infectious version of “What’s Going On.” Whether singing r&b or jazz, Hope displays her own musical personality, embracing the lyrics, uplifting the music with her appealing phrasing, and displaying a voice that is both powerful and subtle.

Hope Diamond, who followed the release of Awaken with sold-out shows in Atlanta and Orange County, is enthusiastic about the future. “I was a late starter but I never smoked, rarely drank and I’ve been told that my voice is in very good shape. As I get older, I can see myself being on stage, sitting in a chair, telling stories, and performing classic songs along with some originals for many years to come.” Her fans look forward to her future performances and recordings as she considers collaboration with songwriters for original material to present!